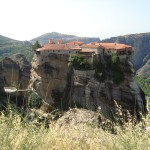 In June 2010 we were off to Europe and we included Meteora, meaning suspended in the air,  in Central Greece as part of our itinerary.  We booked into Plakias guesthouse in Kalampaka, the city under the towering rocks of Meteora. What makes Meteora worth the visit is the monasteries built on huge rocks. Many tourists gather in Kalampaka every year to torture themselves climbing the many steps to the monasteries.  In the extremely hot days of summer it is really grueling to climb all those steps, but it is really worth the effort.  The monasteries were built for hermits seeking mental tranquility and of course to dedicate them to the Christian belief.  It was also safe and protected from enemies.  The Holy Monastery of Great Meteoron, erected on the biggest rock in the mid-14thcentury, is the biggest and most impressive of the monasteries, reaching more than 613m above sea level. There are books and manuscripts preserved in the library from the Byzantine and post-Byzantine eras. Today, monks gather at the church four times a day. It is beautiful to hear the chants of the monks as if carried over the cliffs by the wind. 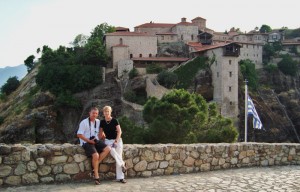 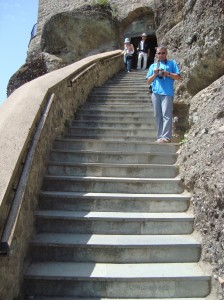 The beautiful scenery of the mountain and the monasteries balancing on the rocks is heaven for keen photographers.  We have rented a car and as a first time driver in Europe, driving on the other side of the road is something to get used to.  Driving around on the steep road to the monasteries is certainly not for the faint hearted, so I almost freaked out when Deon announced that he wanted to drive up the road again later in the day to take some more photographs.  Well, fortunately we made a safe journey and returned with some beautiful photographs.  The late afternoon light is just so much better than the harsh light of the middle of the day. 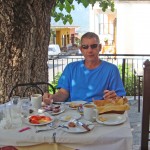 The part of the day I, however, enjoyed most, was coming back from the hike, taking a shower and then having dinner at the Plakias guesthouse. Plakias is situated at the base of Meteora and the rooms have panoramic views.  It is also close to Kalampaka where you can find plenty of restaurants and shops. Plakias is run by a family who serves their guests with a complimentary breakfast every morning.  This is where we were introduced to thick Greek yoghurt with honey, which they serve for breakfast – heaven on earth.  Freshly squeezed orange juice and open omelets with heaps of cheese were part of the breakfast menu.  Although I do not really enjoy coffee, the strong Greek brew was a favourite. 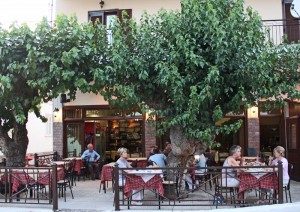 In the evenings we enjoyed their home-cooked meals which were excellent Greek food.  Of course I ordered Moussaka, which is one of my favourite dishes.  To visit Meteora is really an extra-ordinary adventure, not to be missed by keen travelers.