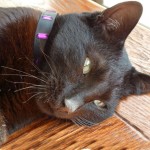 I recently saw a post on Facebook which indicates that Heroes adopt animals from shelters, but I want to change that to Very fortunate people adopt heroes from shelters.

We have been so fortunate to be able to adopt Leica, a six year old cat, from Tears. His name was then Webster, but we have decided to give him a new name because of his new life with us. When we had to choose our new kitty at Tears, it was very difficult, because there were many different cats up for adoption. Eventually, when walking past a black cat with beautiful green eyes, he put his foot through the fence and grabbed my sleeve. I was sold. 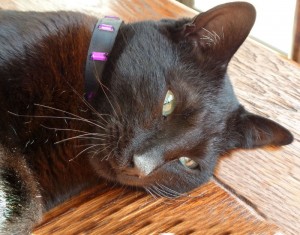 We went back twice to visit him as we could not adopt him immediately, due to renovations at our home. We at last drove to Tears again all the way from Durbanville to Fish Hoek on 10 September 2011, the day of adoption. But the kind lady at Tears told us that he was out for the day. They took him and a few other cats to a cat show. When we enquired about the venue, she told us that it was being held at the Durbanville town hall.

So, all the way back to Durbanville again. It was a cold and rainy day, and when we finally got there, he was sitting in his little cat carrier, feeling very sorry for himself because of the cold. We took him home and let him out of the carrier. Slowly he started exploring his new home. That was the beginning of a new life for him, but also for us, who previously only had dogs.

Today, three years later, he is the love of our lives. We adore him and he adores us. And best of all, he adores his early morning brush. His previous owners moved away and left him behind. Today he loves it when he comes in from outside and we open a door for him. He must have waited in front of his previous owners’ door, waiting for them to open, but all in vain.

This is what his early morning brush looks like…