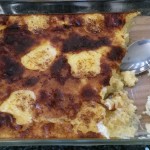 This is the recipe for my mom’s famous sago pudding.  She lives in Port Elizabeth.  When she visits us twice a year, Deon insists that she makes this on Sundays.  If you cannot find sago, you can also use tapioca, which is quite similar to sago.  Both sago and tapioca have a botanical origin.  Sago comes from the middle part of the trunk of the sago palm (Metroxylon sagu).  Tapioca comes from the roots of the Cassava or Manioc (Manihot esculenta),  a popular tropical plant which is apparently resistant to insects because of the high levels of cyanide.  Luckily the cyanide is removed before the tapioca is made.  How do they make the beads?  The starch is separated from the plant and then a gooey dough is made which is then forced through a sieve before heating it at a high temperature.  When we were children, we called tapioca or sago “frog’s eyes”.  Best is to soak the sago or tapioca in water for an hour or two before making the pudding.

30 ml butter, as well as a few knobs to put on top of the completed dish

A small pinch of salt 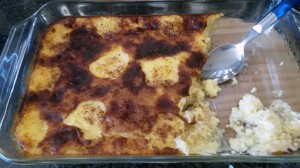 5ml vanilla essence (or the seeds of 1 vanilla pod)

Cook the milk and the sago on low heat until the sago is transparent and glossy.  Add 30ml butter and stir.  Remove from heat.  Add vanilla essence.  Seperate 3 eggs,.  Whisk the whites of the eggs.  Add some of the hot milk mixture to the yolks.  Stir continuously so that the eggs do not set.  Pour the egg mixture slowly back into the milk mixture and keep on stirring while you are doing this.  Fold in 5ml baking powder and the salt. Fold in the egg whites.  Pour into a baking dish, dust with nutmeg and add a few knobs of butter on top.  Bake in an oven that has been heated to 180 degrees C  for almost 30 minutes or until set.  Serve with custard.  I sometimes serve it with a bit of strawberry jam as well.