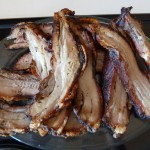 We spent Christmas day at Deon’s mother.  We decided to take along a pork belly as part of the meal.  I do not eat pork.  Well, not included are frankfurters; bacon; chorizo; …  But pork – it is definitely a no go area for me.  Deon does not share this sentiment.  And he has been searching for the perfect pork belly recipe.  He cooked yet another pork belly on the Weber on Christmas Eve 2013.  But he was not satisfied.  He said that it was the last pork belly ever for him.  Maybe he will change his mind later and try another recipe which will disguise the prominent pork taste; we’ll have to wait and see what happens.  In the meantime, this is the recipe he used:

1,3kg pork belly (scored into the fat with a sharp knife across the width of the meat, preferably done by your butcher)

Zest of one lemon 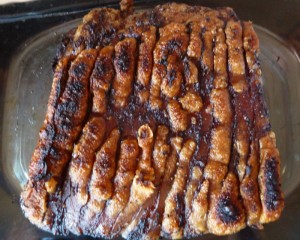 First of all put the meat on a wire rack over a deep pan and pour a kettle of boiling water over it. This makes it easier to eventually apply the herbs. Pat the pork belly dry with kitchen paper.   Chop together the rosemary sprigs, pepper, lemon zest and salt and add the oil..  Rub the belly all over with this mixture.  Push it in between the scored lines.  Heat the Weber to 240 degrees Celsius. Cook the belly in the Weber for one and a half hours.

For the crackling, grill the meat  in the oven for about 20 minutes until perfect.