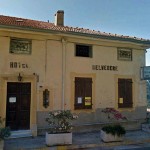 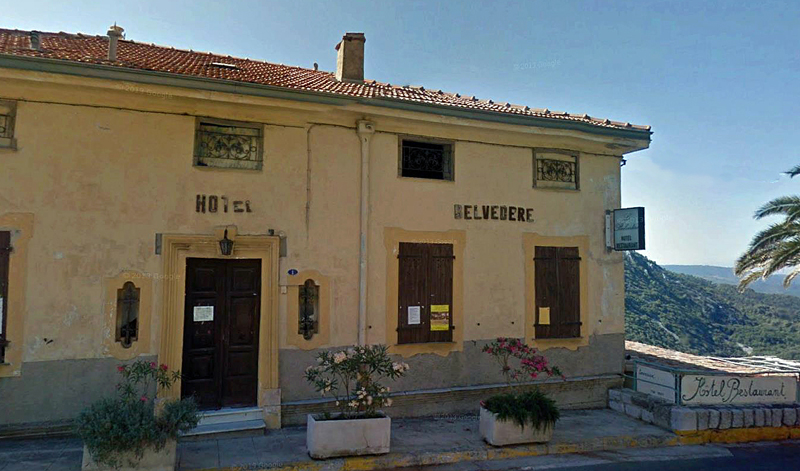 In June 1999 we went to Italy and France. In Italy we visited Rome, Siena, Florence and Venice. Then we travelled from Venice by train to Nice, France, where we met our friend, André. The three of us planned to explore the French Riviera and the arrière-pays niçois (Nice hinterland) for three days. We spent our first night at the Hôtel Belvédère in Peille. The hotel was an old family run auberge. It seems to have closed down now.  While the accommodation was good enough but certainly not comparable to the amenities of a modern hotel, the restaurant was exceptional. It was here that I was first introduced to Penne al Pollo, chicken and penne in a basil pesto sauce. It became a firm favourite in our home. 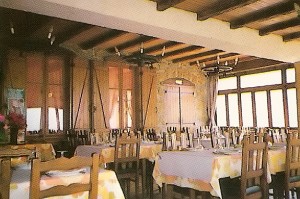 The Restaurant at the Belvedere

We think the owner’s wife was the chef and he was the jovial host, waiter, wine steward and everything else. The restaurant was not very busy on this Tuesday night. There was another party of six or eight people. As the evening progressed, our host, for some or other reason, became even more jovial, until he arrived from somewhere with a drinks order. Just as he was about to hand the woman with the low cut dress her drink, he lost his balance and spilled the drink on her exposed back. He then tried to clean her back with the napkin he had with him! The more she gracefully refused, the more he insisted! Until the chef appeared through what we thought was the kitchen door … We did not see him again that night. On that specific occasion we were fortunate to be served a fabulous dinner by the chef herself!

The following night we spent in Grasse at the Hôtel-Pension Sainte Thérèse. This former Carmelite hostel is now called the Mandarina Hotel. As it was 14 July, the national day of France, we arrived to find a party underway on the lawn under the trees. We have never seen such jolly sisters! Al the rooms were bright and well appointed with a beautiful view over Grasse. We had a stroll through the streets of Grasse and enjoyed a pizza before returning to the hotel. We had a very enjoyable stay. 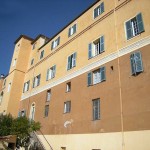 But that was not the case the next night.  Within sighting distance of Monaco, André thought it appropriate to make a reservation at La Trinite, Le sanctuaire Notre-Dame de Laghet. Not the same cup of tea as the one in Grasse. We were totally disgraced by not meeting the six o clock deadline for our arrival. How could we be there at 18:00 during summer when it only turns dark by 22:30? And such a lot of sightseeing to do? The mother superior let us know with no uncertainty that we have inconvenienced them. But, eventually we were served our supper (and lo and behold, that included a bottle of wine). 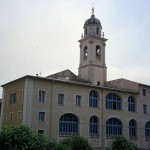 Our unmarried, French speaking friend André was very taken in by a really beautiful young nun! When they enquired whether we would be attending the evening religious meeting (vespers, bible study?), Deon had the audacity to decline the invitation, telling them we wanted to see Monaco instead! They told us which door would be left open for such unholy guests, but we had to return before midnight. When we did turn up before midnight, we found the whole place dark and locked up! André had to wake someone up to open the door for us.

After that we returned with André to Paris to sleep on the floor of his apartment (on a borrowed mattress) and to enjoy his company and the city of lights for a whole week! Thanks, friend!  Thanks to you we have had the opportunity to really learn (and see) a lot about France (and French!).