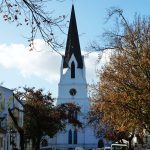 It is a privilege to live in Cape Town.   It is a joy to live less than thirty minutes from beautiful Stellenbosch, second oldest settlement in the Western Cape.  The town is home to Stellenbosch University and it is situated on the banks of the Eerste Rivier.  Stellenbosch overflows with students and tourists, bicycles and vehicles, coffee shops, restaurants, theatres, beautiful buildings and huge oak trees. 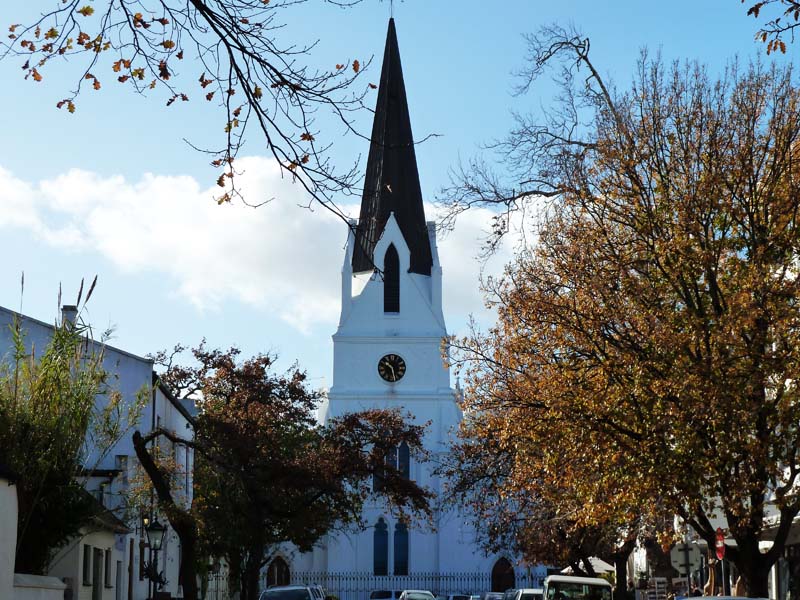 On the first Saturday afternoon in August, we were on our way to one of the oldest buildings in Stellenbosch, the Dutch Reformed Moederkerk (meaning Mother Church) in the top end of Church Street.  The beautiful pristine white building was designed by Carl Otto Hager from Dresden in Germany and completed in 1863.  Beautiful gardens, chiming of bells and exquisite stained glass windows are all part of the Moederkerk.  We were, however, not on our way to a church service, but to a concert which would take place in the church.

On route to the concert, we enjoyed an early evening meal at the Stellenbosch Kitchen, situated at the corner of Dorp Street and Andringa Street.  The restaurant has an old worldly ambience with framed   stamps from an earlier era on the walls.  The restaurant is part of the historical Stellenbosch Hotel which was built in the early 1700’s.   It has been restored in 1987 and declared a National Monument. 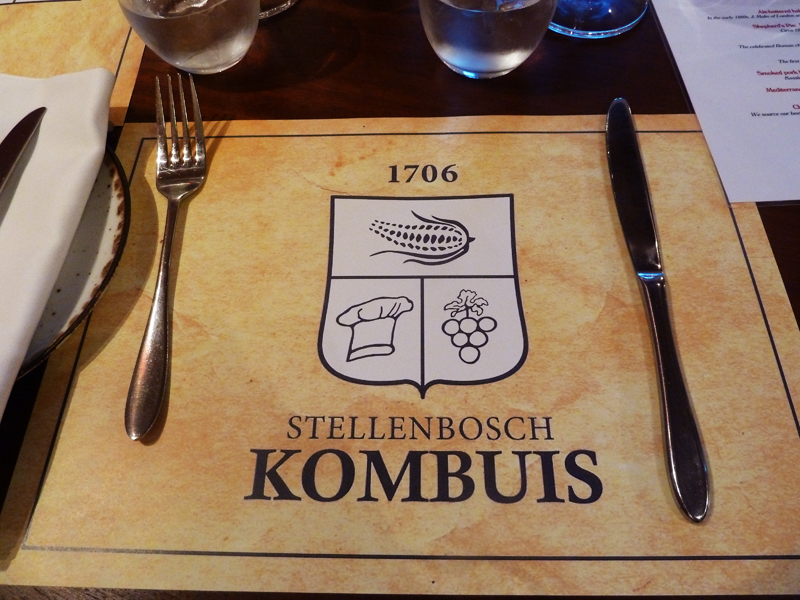 Deon ordered the Mediterranean Seafood Medley consisting of line fish, prawns, calamari, langoustine, mussels, tomato ragout and gnocci.  It was “flavours of a seafood stew originating from Marseille, France”, as indicated on the menu.  Deon called it a deconstructed bouillabaisse.  I enjoyed a dish of Potato Gnocchi with butternut, sun-dried tomatoes, olives, goat’s mild feta and basil pesto.  The recipe was officially published in the 19th century by “The grandfather of Italian cuisine”, Pellegrino Artusi.  Beautiful décor and food as well as good service are all part of an excellent restaurant.  This restaurant certainly has all of these ingredients. 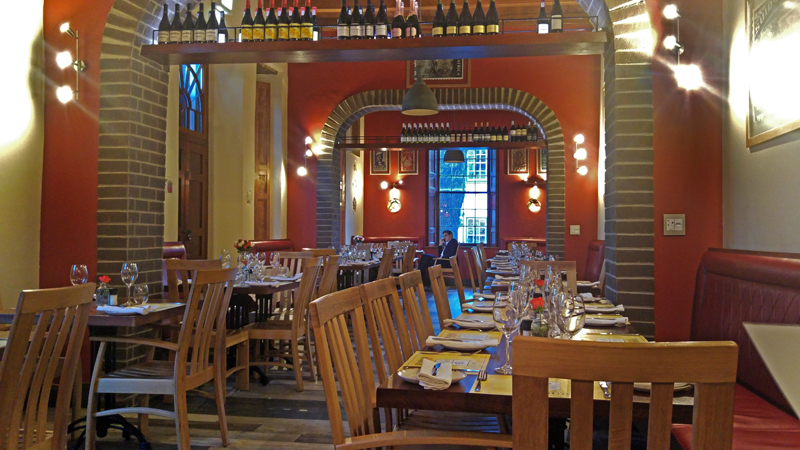 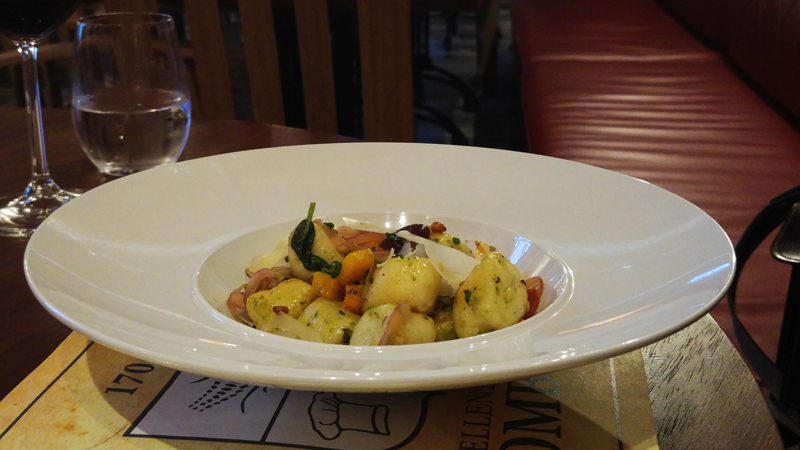 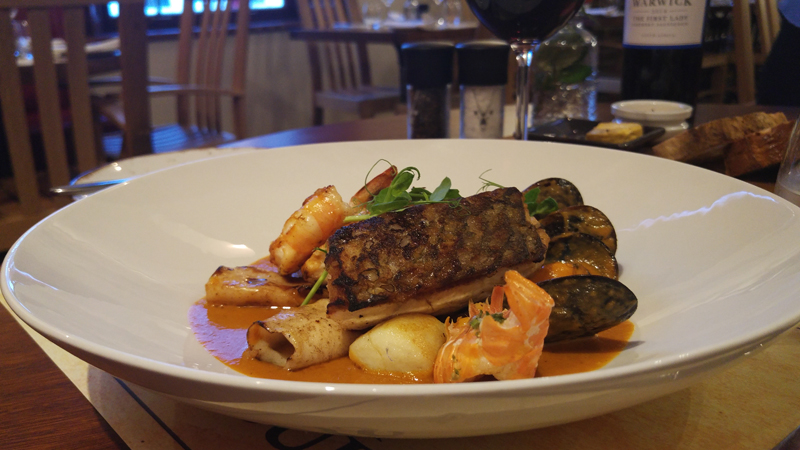 With not much time left before the concert would begin, we were off to the Moederkerk.  The huge building was almost full when we arrived.  People from all over Cape Town came to listen to the beautiful sounds of the organ, played by South African organist Zorada Temmingh.  Zorada is known for her free improvisations on church music.  She had released several organ CD’s; is a competent pianist and has been the organist of the Moederkerk for the last thirty years.  Also performing at the concert  was well-known Nataniël, popular as a cabaret and stage artist, writer, chef, columnist and comedian. 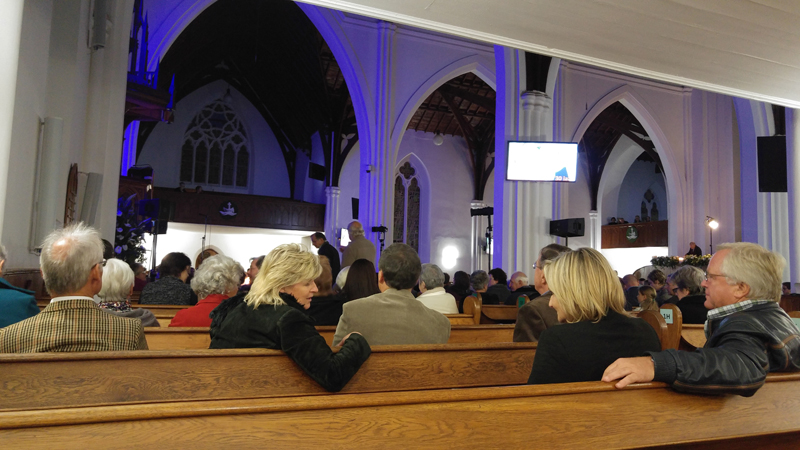 When the first sounds of the organ started flowing through the huge space, it was the beginning of a magical evening with Zorada and Nataniel.  Zorada made magic on the three manual organ, improvising, sometimes even using her arms, bruising the keys.  Nataniel performed, weaved stories into the performance and performed again.  Music was the star of the evening.  It was heart-warming to see that also children and young people were part of the audience, enjoying the music. 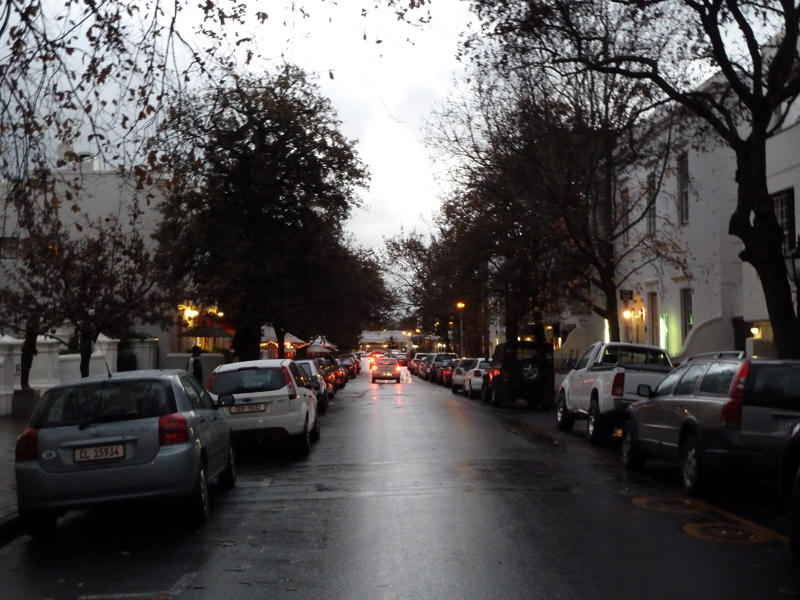 After the show we had a late night coffee at a restaurant, sitting at an outside table and enjoying the almost warm wintery weather.

What a performance, thank you Stellenbosch!