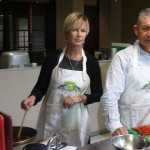 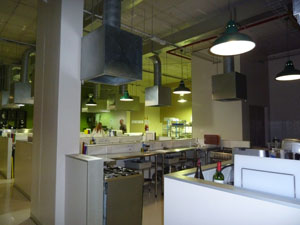 We read about Perfect Paella, owned by José and Lisa Gómez, in Cape Town.  It seemed like a good idea to attend and to learn more about Spanish cooking and paella in particular.  When we mentioned it to Deborah, she was enthusiastic as well.  She and her son, Krige, have just completed a Spanish language course and she thought this could be a good thing for her and Krige to do.

On Thursday, 11 May 2013, we turned up at 18:00 at the Kitchen Venue in Woodstock for our three hour journey through the products of Spain, cooking and tasting them.  It was explained to us that paella is actually a rice dish to which you add whatever ingredients you have in your kitchen cupboard.  It could be anything, but never chorizo.  The flavour of chorizo is apparently too strong and could overpower the taste of the other ingredients.

On this night, there were eight couples in all.  After the recipes were handed out and it was decided who will cook what, everybody started working at their stations.  We had to collect all our ingredients and then the chopping, mixing, laughing and yes, actual cooking, began.  The recipes were translated from Spanish into English, and sometimes got rather confusing – indeed a lot was lost in translation!  Agree, Deborah? 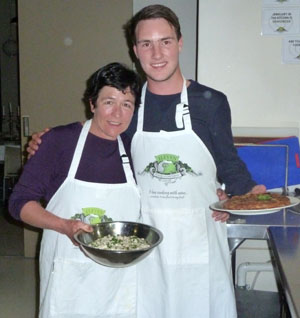 Each couple had to prepare two different dishes.   The Spanish guest cook gave ideas, tasted our food, answered questions and explained the recipes where needed.  The students prepared mushrooms with garlic, spinach Catalan style, Spanish omelette with mushrooms, zucchini omelette with onions, Spanish omelette with onions, meatballs with peas, Russian Salad and chickpea salad.  We were responsible for the chickpea salad and Deborah and Krige prepared the Spanish potato omelette with onions, as well as Russian salad or Ensaladilla Rusa.  Deon was also brave enough to make homemade mayonnaise with only one egg and 250 ml of sunflower oil.  From now on, we will not buy any mayonnaise.  Guess who will prepare homemade mayonnaise at home in future? 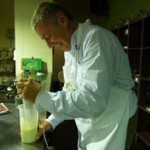 After a lot of hard work, wine, laughs and translation, we were ready to gather in the dining room around candle lit tables.  Before we tucked in, our host tasted every dish and commented on it.

It was an enjoyable evening – we met new friends; made new dishes and had some fun.  It was fun, and we would do it again. 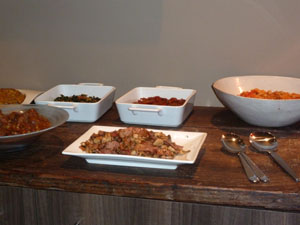