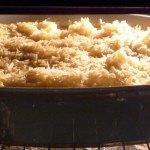 It is so strange that many people shrug when they hear the word eggplant, so the following recipe is for those who love eggplant.  I suggest, however, that those who do not like eggplant also try this, especially as the eggplant is hardly noticeable in the dish.  Jeffrey Steingarten wrote a book with the title “The Man Who Ate Everything”.  When he had to answer the question “Do you find yourself obsessing about food?” on a medical form, his answer was:  “Not at all, but I think about almost nothing else.”  For Steingarten all food is wonderful. (Even eggplant.) The best part in his book is on chocolate.  He writes:  “I have always considered people who believe that chocolate is a poison to be twisted beyond redemption.”  Say no more. Read the book and be brave – eat everything, eat eggplant.

Wash and peel the eggplants.  Cut into slices and place it in a bowl of saltwater.  Drain and pat dry after 20 minutes.  Peel the potatoes, cut it into slices and cook until soft.  Wash the baby marrows, cut it into slices and cook until just soft.  Heat the olive oil in a pan and brown the eggplant on both sides, while you keep adding oil.  Remove the slices from the pan and drain on paper towels.  Sauté the onions until transparent, add the minced meat and brown over a high heat.  Stir in the tomato sauce, white wine, nutmeg and parsley, salt and pepper.  Reduce the temperature and simmer for about 10 minutes.

Melt the butter in a pan, stir in the flour carefully and cook for a minute.  Pour the milk in slowly while you stir continuously.  When the mixture thickens, remove the pan from the heat, stir in the egg yolk and season the sauce with sugar, lemon, nutmeg, salt and pepper.  Stir in a bit of the cheese.

Preheat the oven to 180⁰C.  Cover the base of a large ovenproof dish with a layer of potato slices and then add half the meat mixture.  Cover with eggplant slices and another layer of meat.  Pour over the béchamel sauce, smooth over the top, and sprinkle with cheese, breadcrumbs and nutmeg.  Cook in the oven for about 45 minutes until it is golden brown.  Let it rest a bit before serving.  Serve with a Greek salad.