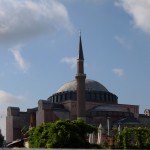 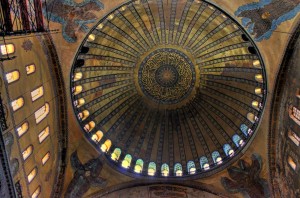 Our first visit to Istanbul was in summer 1997.  We were well prepared.  We have read much about Constantinople, the once capital of the civilized world.  One of the first things we wanted to do, was to visit and experience the 14 centuries old Aya Sofya (The Church of the Devine Wisdom) built by emperor Justinian to restore the greatness of the Roman Empire.  It is said that Justinian, on entering his great creation for the first time, exclaimed:  Oh Solomon!  I have outdone you! referring to Solomon’s temple that was built in Biblical times in Jerusalem.  It was completed in 548 and was the biggest church in Christendom until Constantinople was conquered by Mehmet the Conqueror in 1453.  Lonely Planet Turkey (1996) describes the ideal way of entering of the church:

… enter the church slowly, one step at a time, and watch what happens: at first there is only darkness broken by the  brilliant colours of stained glass windows.  As your eyes adjust to the dark, two massive doorways appear within, and far beyond them in the dim light, a semi-dome blazing with gold mosaics portraying the Madonna and Child – she as the queen of heaven.  Take a few steps and stop just inside the threshold of the first door:  the far mosaic is clear and beautiful, and the apse beneath it makes a harmonious whole.

Look up from where you are standing now to see a gorgeous mosaic of Christ as Pantocrator (Ruler of All) above the third and largest door visible except for the august expression on the face.

Take a few more steps and the face of the Pantocrator becomes visible.  Look deep into the church again, and you’ll see that the semi-dome of the Madonna and Child is topped by another semi-dome, and above that is the famous, gigantic dome of the church; at the same time, you are facing the Pantocrator in all His majesty. 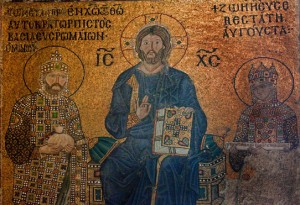 Walk through the second door and towards the immense imperial Door, and you are surprised to see that the ‘gigantic main dome’ is in fact only another semi-dome:  halfway to the Imperial Door, a row of windows peeks out above the larger semi-dome and betrays the secret.  As you approach the Imperial Threshold the real, the magnificent dome soars above you and seems to be held up by nothing (p 146).

The church was filled with wonderful mosaics, but when the Turks took Constantinople, all the mosaics were covered with plaster.  Some were uncovered and restored, but christian mosaics in a Muslim country is a sensitive issue.  It is uncertain whether the Pantocrator mosaic still exists. 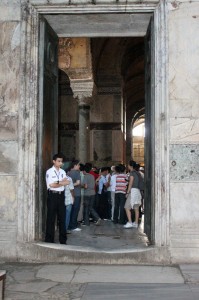 What really brought a great feeling of humility over us, was the sight of the huge slab of marble used as a threshold that was worn away by the feet of believers in the course of 1 400 years!

To us it is one of the most magnificent buildings we have ever visited.  We promised ourselves that we would return one day.  In the summer of 2010 we had a stopover in Istanbul en route to Greece.  We decided to stay for a couple of days to revisit some of our favourite sites and to see some of the things we could not see during our first visit.

And how the city has changed in thirteen years!  We will come to that in a later post. We were fortunate on this visit to our favourite church, the Hagia Sophia, that the scaffolding erected for restoration, was temporarily removed because Istanbul was one of the European Capitals of Culture in 2010.  This time we could, without the scaffolding, appreciate the vastness of the interior beneath the main dome and surrounding semi-domes.  We spent some time, the awe of being in such an old and magnificent building foremost in our minds, thinking about the people that prayed in this church over the years and about their stories.  We felt humbled by the fastness of the building, but were also astonished by the achievements of man. 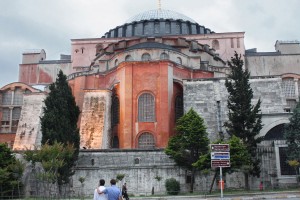 The Deësis Mosaic with Christ as Ruler