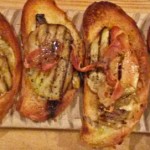 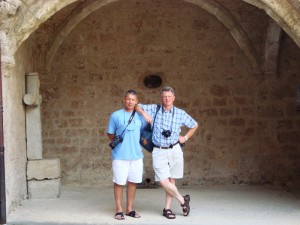 We have a friend, André, who lives in France. Friends in France recently invited him to dinner and he told us about the interesting starter he was served – crostini with eggplant.  Yes, many people do not eat eggplant, but we love it, whether it is served in Moussaka, Papoutsákia (little slippers in Greek), or in Melanzane Parmigiana (recipes to follow soon). When we were in Greece, our hosts cooked the eggplant on the fire by cutting the eggplant in half and simply frying it over the flames until the flesh was tender.

Eggplant originated in India and in China, it has been a favourite vegetable for thousands of years.  The Arabs brought it to Europe in the 13th century.  It has been grown in Italy since 1550.  The plant is related to tomatoes.  Colours range from dark purple, to white, yellow and black.  You can buy them in different shapes.

Now, back to André’s crostini.

honey (not too much)

eggplant slices, sliced in the length and fried until soft

Toast the bread and rub with a garlic clove.  Drizzle some olive oil and a bit of honey on the slices.  Top the bread with the cheese, then the eggplant slices and lastly the bacon.  Sprinkle with the Italian herbs and black pepper.  Bake in an oven that has been heated to 180 degrees C until hot.  Enjoy with a green salad.